[T]he current measurement of prosperity is riddled with errors and omissions. Better to embrace a new approach than to ignore the progress that pervades modern life.1“Gross domestic product (GDP) is increasingly a poor measure of prosperity. It is not even a reliable gauge of production” (“The trouble with GDP,” The Economist, April 30, 2016).

In section 6, we described equilibria in the productive process. However, as mentioned in section 6.1, there are also periods of change. For instance, economies were transformed on a massive scale by the Industrial Revolution (circa 1760-1840).

To begin, we first look to a revolution in agriculture and economics that, to a large degree, was brought about by introduction of the heavy plough in Medieval European agriculture.

As of the 9th century to the end of the 13th century, the medieval European economy underwent unprecedented productivity growth (White 1962; Pounds 1974; Langdon, Astill and Myrdal 1997). The period has been referred to as the most significant agricultural expansion since the Neolithic revolution (Raepsaet 1997). In his path-breaking book, “Medieval Technology and Social Change,” Lynn White, Jr. argues that the most important element in the “agricultural revolution” was the invention and widespread adoption of the heavy plough (White 1962). 2Thomas Barnebeck, Andersen Peter Sandholt Jensen and Christian Stejner Skovsgaard, “The Heavy Plough and the Agricultural Revolution in Medieval Europe,” Department of Business and Economics, University of Southern Denmark, http://eh.net/eha/wp-content/uploads/2013/11/Skovsgaard.pdf. Accessed April 14, 2019.

[t]he invention of the heavy plough made it possible to harness areas with clay soil, and clay soil was more fertile than the lighter soil types. This led to prosperity and literally created a breeding ground for economic growth and cities – especially in Northern Europe.3“How the heavy plough changed the world, New technology ploughed its way to prosperity in medieval Northern Europe,” ScienceNordic, January 22, 2013, http://sciencenordic.com/how-heavy-plough-changed-world. This article reports on the work of Anderson, Jensen, and Skovsgaard. See note 4.

Changes were at all levels of economies and societies.

[T]he heavy plow stimulated food production and, as a consequence population growth, specialization of function, urbanization, and the growth of leisure.4Thomas Barnebeck Anderson, Peter Sandholt Jensen and Christian Stejner Skovsgaard, “The Heavy Plough and the Agricultural Revolution in Medieval Europe,” (Paper given at the University of Copenhagen, on November 1, 2012), Medievalists.net, http://www.medievalists.net/2013/01/the-heavy-plough-and-the-european-agricultural-revolution-of-the-middle-ages/. Accessed April 14, 2019. See also article in note 1 for graphs showing Europe’s urbanization and population densities, following increasing usage of the heavy plough.

In section 7.1, we explore elementary aspects of how steady production rates of the heavy plough resulted in accelerations in wheat yield rates. It is one example but results generalize. In section 7.2, we invite a more careful look at rates and accelerations. A normative pattern is revealed, namely, that a surge in surplus production can make possible a subsequent surge in basic production. Section 7.3 briefly looks to accelerator effects that can be simultaneously operative at all levels of the productive process.

Using the new plough, yield was usually in the range of 4 to 15 bushels of wheat grain per acre.5This was at a ratio of about four seeds harvested for every seed planted. “Crop yields in the Middle Ages were extremely low compared to those of the 21st century, although probably not inferior to those in much of the Roman Empire preceding the Middle Ages and the early modern period following the Middle Ages. The most common means of calculating yield was the number of seeds harvested compared to the number of seeds planted. On several manors in Sussex England, for example, the average yield for the years 1350–1399 was 4.34 seeds produced for each seed sown for wheat, 4.01 for barley, and 2.87 for oats. (By contrast, wheat production in the 21st century can total 30 to 40 seeds harvested for each seed sown.) Average yields of grain crops in England from 1250 to 1450 were 7 to 15 bushels per acre (470 to 1000 kg per ha). Poor years, however, might see yields drop to less than 4 bushels per acre. Yields in the 21st century, by contrast, can range upwards to 60 bushels per acre. The yields in England were probably typical for Europe in the Middle Ages” (https://en.wikipedia.org/wiki/Agriculture_in_the_Middle_Ages#Productivity). See also, Alexander Apostolides, Stephen Broadberry, Bruce Campbell, Mark Overton, Bas van Leeuwen, “English Agricultural Output And Labour Productivity, 1250–1850: Some Preliminary Estimates,” http://www.basvanleeuwen.net/bestanden/agriclongrun1250to1850.pdf, Accessed April 14, 2019. For our example, suppose that

1. yield is about 7 bushels of wheat grain per acre per year;

2. that, in addition to other work, a carpenter and blacksmith can produce about 15 new ploughs per year6Eventually, the number of new ploughs needed tapers off and the plough makers’ spend more time on maintenance and replacement.; and

As new ploughs are produced and come into use, new land is tilled and so annual yields of wheat start increasing. With circumstances as described in (1), (2) and (3), what are the new wheat yield rates? And, how are they changing?

A farming family might take care of about 40 acres. Not all land was used for growing wheat. Other grains were also grown such as rye, barley, buckwheat, millet and oats. Some land was left as forest. And, there was crop rotation, a method that includes leaving some fields to fallow each year.

4. We suppose that farmers who obtain and use the new type of plough till about 4 acres for wheat.

If a farmer uses a new plough to till 4 acres for wheat then, by (1), the yield for that season will be approximately 4 x 7 = 28  bushels of wheat grain. If a second farmer (in a nearby village7This is a simplification. We go to a nearby village because, in medieval times, ploughs and other tools were often shared by several farmers. ) also obtains and uses one of the new ploughs, and also tills about 4 acres for wheat, then the combined yield will be approximately 2(4 x 7) = 2(28) = 56 bushels of grain per year.

As mentioned above, we are assuming that making the new type of plough is already a going concern. For tracking the process, let the first year be t = 1, the next year t = 2, and so on, so that np(t) is the number of new ploughs manufactured and in use “in year t.”8Time t is not a “calendar year” but “years elapsed” from when we start tracking rates. Note also that for now we are ignoring lags. We will return to that in section 7.1.2.

which is more commonly written with the “constant” 10 before the “variable” t: 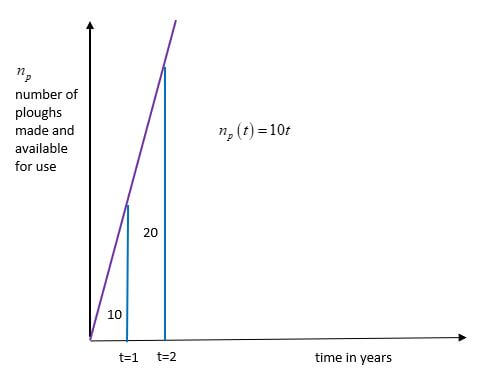 . Illustrates net numbers of heavy ploughs made and available for use.

Now we can get back to sorting out the yield. From (1), the number of bushels of wheat grain in year t is

But, the number of acres devoted to wheat each year is

We can substitute this quantity into equation (6).

9The quantity is a rate, hence ‘v’ is for ‘velocity.’ The subscript ‘b’ is for “bushels of wheat grain,” but more generally, b is for ‘basic production.’

Our inquiry started from the observation that wheat yield increases with the ongoing making and use of the new type of plough. So, we express our solution in terms of the rate at which ploughs were being made. We have

Key quantities are now in better view. The term in square brackets, [15 − 5], is the production rate of new ploughs over and above maintenance and replacement. Anticipating the need for more a general result, it will help to name quantities. New ploughs can be made at a rate of about

per year. There is also maintenance and replacement, which is equivalent to a rate of about

ploughs per year. So, the net production rate for new ploughs (that is, the rate that is over and above maintenance and replacement) is

ploughs per year. (In our example, that rate happens to be the constant

In order to highlight that term, we rewrite equation (8):

What else does this answer mean? By making and then using ten new ploughs in year t = 1, corresponding production of wheat is

bushels; in year t = 2, there are ten more ploughs in use (in addition to the ones from the previous year) and so production of wheat is doubled or, by the equation,

is any constant then, by retracing the steps above,

And so, the acceleration term is

Equation (11) explicitly reveals how the constant net production rate for ploughs (over and above maintenance and replacement) leads to an accelerating yield for bushels of wheat. (Recall that the constants  are, 4 and 7 respectively, the number of acres devoted to wheat, and the yield in bushels per acre using the new type of plough.)

If we ask about how the production rates of bushels of wheat change as a consequence of the constant production per year of new ploughs, then the question is about acceleration of yield rates. For that, we already have equation (11), that is,

In note 8, we pointed out that our derivation ignored “lags.” But, by assuming that results are as described in (1), wheat yield at time t (late summer and early autumn) is determined not by how many ploughs are available or in production at that time t but by how many ploughs were available or being made the prior year (and then used in the immediately preceding season leading up to time t). In other words, wheat yield rate at time t is based on how many ploughs were available or were being made sometime the year before. To meet this issue, a “lag”13In mathematics, this is also called a “delay” term, such as in the study of “delay equations.” term is needed that, for our example, we will take to be about one year. Why about one year? There is time needed for making new ploughs (production of a surplus good). That time is followed by time needed to use those ploughs (part of basic production). The time for basic production also includes time for wheat to grow, time for harvesting at the end of the summer, and time to get wheat to people living in villages and cities. By taking that compound lag into account14It is a “compound” lag in the sense that it is time needed for surplus production plus time needed for use in subsequent basic production., and by retracing the derivation of equations (8) or (9), we replace t with t − 1. The more correct formula is, then,

As before [either by numerical computations or (for students familiar with calculus) by taking the derivative], there is constant acceleration:

By including a lag of approximately “1  year,” equations (12) and (13) express the fact that yield rates and accelerations of yield rates of bushels of wheat at time t are mainly determined by the number of ploughs already made or already in use the previous year. They were available for use and (we assume) were used in the season immediately prior to and leading up to time t.

In addition to using a better plough, yields were also increased in other ways. For instance, Medieval European agriculture was refining the art of crop rotation16“Throughout human history, wherever food crops have been produced, some kind of rotation cropping appears to have been practiced” (The Editors of Encyclopædia Britannica, “Crop Rotation,” Encyclopædia Britannica, https://www.britannica.com/topic/crop-rotation. Accessed April 14, 2019). Crop rotation helped maintain healthy fields and could increase yield by upwards of 50%.. The heavy plough was a new tool. Crop rotation made fuller use of tools already in use. It took a few centuries for production and use of the new type of plough to spread across most of Europe17See note 2.. The idea of crop rotation, however, spread more quickly, over a few decades. Relatively speaking, then, acceleration in crop yield rates due to crop rotation was a “shorter-term” acceleration, the effects of which soon levelled off.

To include accelerations due to crop rotation, we introduce another term into equation (13) . Let

represent the shorter-term acceleration. Then,

Remember that 4 and 7 are, respectively, the number of acres ploughed and devoted to wheat, and the number bushels of wheat obtained per acre. These numbers were partly based on historical records. Actual ratios, of course, vary. Expressing the same idea but now allowing for whatever the ratios happen to be, we write