We have been describing transitions from one equilibrium to another. Allowing for seasonal variations, when in equilibrium, both surplus production and basic production are, on average, relatively constant.1In order to more easily identify key quantities, for now we are ignoring redistributive payments. So, in an exchange economy, equilibrium means cross-over payments are approximately constant and equal. That is, i2 is approximately equal to m1. Otherwise, one of the two flows would eventually be underfunded, not only ruining the possibility of sustained equilibrium but, before long, leading to breakdowns in the economy. For basic and surplus flows are mutually dependent.

Equilibrium is more a matter of fractions rather than gross amounts. It implies approximate equality of cross-over payments i2 and m1. But these are parts of aggregate outlays. In other words, since the economy has two flows, both i2 and m1 are fractions G´´and G´ of aggregate outlays O´´ and O´, respectively2For example, if an economy is in equilibrium and if for a time basic production mainly requires little maintenance and replacement, then the percentage of basic outlay O´ that goes to maintenance and replacement will be relatively small, say, 15%. In other words, m1 is approximately equal to 0.15 x O´.:

With the new symbolism, figure 8.1 becomes the following: 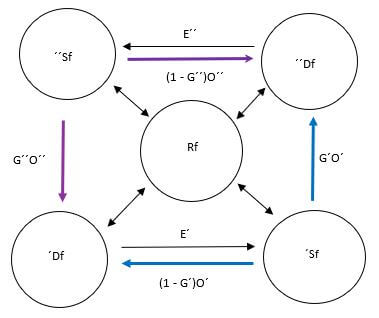 Now consider a key ratio O´/ O´´.3CWL21, 53-4. Lonergan’s work on pages 53-4 are in terms of aggregate basic income rate I´ and aggregate surplus income rate I´´. Lonergan defined “normative proportion.” For our introduction we take our lead from the pedagogy of Economics for Everyone and so for now keep our discussion focused on outlay. Outlay is the flip side of income in the sense that O´ + O´´ = I´ + I´´. “But, it would be quite erroneous to break that identity into the two following equations: O´ = I´, O´´ = I´´”(Economics for Everyone, 3rd ed., 59).  Why is that ratio directly significant?

It follows that the ratio O´/O´´ is a natural quantity to look at. It represents aggregate basic outlay per aggregate surplus outlay. In dollar amounts (rates), O´/O´´ represents “bang for our buck,” that is, “basic production” per “surplus production.” If the ratio is large, then, most of the economy is in basic production. In monetary terms, this would mean that relatively small aggregate surplus outlay rates are working in sync with relatively large aggregate basic outlay rates; and similarly, if the ratio is small.

We take a moment to review:

What happens if needed changes in wages i2 are wrongly estimated? Is a particular equilibrium so finely tuned that the economy is vulnerable to perturbations? Is the equilibrium heading for recession or perhaps major contraction if wages i2 were to change by some increment that does not quite match actual monetary needs?4There will always be limits to what an economy can support. For instance, consider the cases G´´ = 0% and G´´=100%.

From 5 in our review above, one way to estimate the impact on equilibrium is to determine what happens to the ratio G´´/ G´ when we change the numerator G´´or the denominator G´.

The reader familiar with fractions may already see what the issue is, arithmetically. But we also need to interpret those results for an economy.5 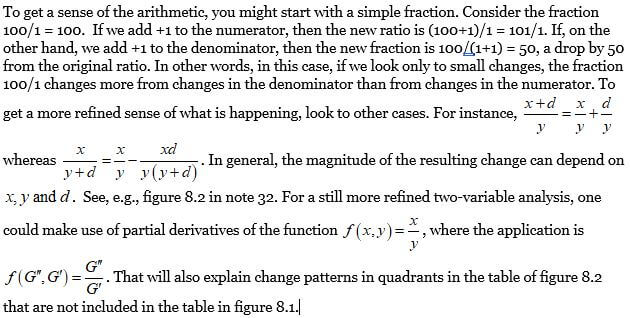 We are looking at fractions of the form G´´/ G´. The question is, ‘What happens to the fraction if we adjust either G´ or G´´? Or, what is the impact on equilibrium when there are changes in cross-over payments?6Economics for Everyone, 3rd ed., bottom of 105 to top 108.

Our results from section 8.2.1 shed light on contemporary debates about minimum wages.

Debates tend to be about the pros and cons of a possible increase by $1.00, or so. Those who argue against increasing minimum wage give dire warnings. These include predictions that, motivated by profit (considered to be normal in today’s economic models), businesses would consequently raise selling prices that would cancel out hoped for advantages of increasing wages. In the meantime, there would also be increased unemployment, and small businesses would need to reduce or eliminate health insurance plans9Niels Veldhuis and Sylvia LeRoy, “Does the minimum wage need to be raised? No: An increase hurts those it is meant to help,” Fraser Institute, https://www.fraserinstitute.org/article/does-minimum-wage-need-be-raised-no-increase-hurts-those-it-meant-help, no date. Accessed April 15, 2019.. In fact, there is some evidence for such results10There have been numerous studies. But, “economists have for many years disagreed about their effectiveness, arguing that they may price low-skilled workers out of the market and cause unemployment” (“Minimum Wage,” The Canadian Encyclopedia). Alison Doyle, “Pros and Cons of Raising the Minimum,” thebalancecareers.com, updated December 20, 2018, https://www.thebalancecareers.com/pros-and-cons-of-raising-the-minimum-wage-2062521. Accessed April 15, 2019.. However, historically, those cases have been isolated and constitute only a small fraction of actual outcomes11Jeremy J. Nuttall, “Experts Weigh In On Five Arguments Against a $15 Minimum Wage, Despite rhetoric, a closer look at debate shows little to fear from wage increase for lowest paid,” TheTyee.ca, January 12, 2018, https://thetyee.ca/News/2018/01/12/Experts-Weigh-In-Five-Arguments-Against-Min-Wage/. Accessed April 15, 2019.. In most cases, when raising minimum wages there have been no discernible negative impacts on the economy in question. A more basic observation is that alleged cons to raising minimum wages are derived from hypotheses of a larger con, today’s economic models.

Looking at the problem with normative structures in mind, we inquire into the feasibility of increasing minimum wages.

In 2017, the USA annual surplus outlay was in the trillions of dollars.12For the point that we make here, we don’t need a precise estimate. We base this on looking at recent GDPs. GDP does not differentiate surplus and basic. However, in the case of the USA, it gives an estimate on the order. GDP(1) and GDP(2) also were in the trillions. Adding in aggregate outlay from surplus supply chains only increases the estimate.  That year, approximately “1.8 million workers with wages at or below the federal minimum made up 2.3 percent of all hourly paid workers.”13United States Department of Labor, “Characteristics of minimum wage workers, 2017,” in Bureau of Labor Statistics, March 2018, https://www.bls.gov/opub/reports/minimum-wage/2017/home.htm. Accessed April 27, 2019. Now, i2 (total) = i2(for those working for minimum wage) + i2(higher hourly wages) + i2(other).

We ask what may at first seem to be an outrageous question: In today’s USA economy (2017ff), what might we expect from doubling minimum wages in all states?

We would be doubling i2(for those working for minimum wage). But, at present, that is a small fraction of i2(total), a dollar amount of much higher order than i2(for those working for minimum hourly wage). There would, then, be little change in G´´. In other words, doubling present-day minimum wages in the USA would have negligible effect on the viability of current equilibrium dynamics in the USA economy14

This also does not take into the account the vast resources squandered in Wall Street, nor billions of dollars removed annually from circulation and hoarded in off-shore accounts..

To summarize: There are arguments to the effect that minimum wages should not be increased. Those arguments invoke (flawed) contemporary economic principles. And, with few exceptions, negative predictions are contradicted by historical precedent. On the other hand, doubling today’s minimum wages would have negligible effect on the viability of current equilibrium dynamics, and at the same time, would significantly improve the quality of life of countless individuals.