The Dynamics of Knowing: The Last Three Boxes

To get the full benefit of this exercise you will need to have completed Task A and Task B in Journeyism 10 before moving on to this chapter. So, we hope you have resisted the all-too-common temptation to “read ahead.”

It’s no secret that when wonder is aroused, your desire to understand can operate at lightning speed. This is no less true of the next stage of your desire to know, to reach a judgment of fact.

That this activity can easily be overlooked is evident by the common error of failing to distinguish direct understanding from reflective understanding or judgement.1In the context of the philosophical tradition, please see Journeyism 18. Unfortunately, we suffer in a world that, so to speak, spontaneously judges the colour of a “ugaga” without understanding what a “ugaga” is.

This installment picks up where we left off with your effort to understand the alphabet puzzle:

Perhaps you have added three letters to the series to give you a possible solution? In other words, your intelligent insertion of the next three alphabet letters, I, J, K, demonstrates your understanding of the data and so you formulate a plausible hypothesis:2Again, please note that principle, idea, formula, concept, law, hypothesis all mean the same thing.

Letters with straight lines belong above the line and letters with curved lines belong below the line because that principle holds for the data; the shape and placement of letters I, J, K is consistent with the pattern of shapes established by the placement of the first six letters, A, B, C, D, E, F. Task 1: Wondering about your understanding of the alphabet puzzle

Discerning your activity at this stage is very tricky and elusive. You are still in a state of wonder. Only now you have shifted from the empirical mood of what-ing, to the critical mood of is-ing. You are critically on the ‘look-out’. You ask: Is my formulation correct? Is it so?

If your hypothesis does not suffer from oversight of further relevant data, resulting in further what or why questions, then you can complete the rest of the alphabet.

So you go back to the puzzle to test your idea by adding more letters to continue the sequence.

This is an intelligent going back. A correct answer (drawing on your direct insight) will give you an intelligent basis in which to carry on the sequence. You review the data and the clues in order to exhaust any lingering what or why questions.

You weigh and marshal the evidence to ensure everything adds up to fulfill every condition required to render judgment. In this case, you figure that if your solution is correct, then it will make sense in each instance of placing the next letter. And if it makes sense in each instance, then you will be able to finish the rest of the alphabet. This condition for correctness must be fulfilled.

Upon inserting the remaining letters, you will have generated a reason to commit to your hypothesis.

The placement of each letter of the alphabet is consistent with the pattern of shapes as given by the placement of the first six letters, A, B, C, D, E, F. The condition for correctness has been fulfilled.

Yes! It is so. Your hypothesis is correct and you judge it to be a fact.

Task 2: Wondering about puzzling over your understanding of the alphabet puzzle

The question is: how did your thinking work? Track and highlight the data of wonder expressed in the last three boxes in the top row of the diagram : Is?, Reflective-Insight, and Judgement of Fact.

In order to grasp the correctness of your hypothesis or formulation, all three levels of consciousness are reviewed: 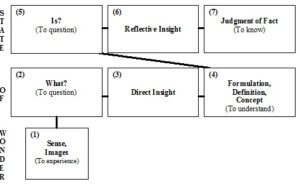 Notice that your is-questioning is reflective in the sense that your thinking is a thinking about your already attained possible solution and includes a turning back to your what-level formulation so that you can ‘weigh it’ against the ‘data.’

Reflection on your sensing (Box 1)

The condition for correctness is something you take from the puzzle data because the puzzle contains the instruction, expressed by the ellipsis, “continue the sequence.”

Reflection on your intelligent what-formulation (Boxes 2 – 4) You reflect on your discovery of an intelligible pattern in the data, the intelligibility of which is reinforced by your clues and your modifications to the sequence and expressed in your hypothesis.

Is your hypothesis correct?

There are three possible responses: Yes, No or I’m not sure. The latter two responses will force you to return to the What-level (Boxes 1 – 4) because you either must reject your hypothesis entirely, or deem it to be insufficient enough to need revision based on further empirical analysis of the materials generated so far.

On the other hand, if your hypothesis holds up to your critical reflection, then you have satisfied all conditions for verification and correctness.

Your reflective grasp is a second great shift in you! From your initial is-question (“Is this the correct solution?”), you now reach a

“Yes! This solution is correct!”

In this instance, then, you possess immanently generated knowledge. Taking a Fresh Look at Belief

In practice, belief is as intelligent and reasonable as is the collaboration of men [and women] in the advancement and in the dissemination of knowledge.3CWL3, 735.

It is important to distinguish between the meaning of immanently generated knowledge (judgement of fact) and the meaning of belief. The topic of belief is so complex it requires much more attention than we can provide here. So, we thought it would be best to acknowledge its importance with a brief description and examples, and point to more detailed treatment elsewhere.4 For further treatment see Introducing Critical Thinking, Chapter 22 (“Belief”), Philip McShane, Wealth of Self and Wealth of Nations, Chapter 7 (“The Economy of Truth”), Bernard Lonergan, “The Notion of Belief,” (CWL3), 725-740.

Belief is not like taking a chance. Belief is a conviction about truth that is born in us by trusting someone else. It is solidly reasonable, based on listening to the other who is giving you the guidance, pointing the way. One way to think about having exercised your belief is to draw on a memory of being lost in a strange town or city and asking a stranger for directions to your destination.

At all events, you might be surprised by the suggestion that more than ninety per cent of one’s store of facts is belief.