A Genetic Structure for Method

We introduce, in Diagrams 1 and 2 below, a concrete heuristic for method.2Lonergan coined the heuristic, “Functional Specialization.” It is a genetic structure3When we speak of “genetic structure”, the expression “structure” must not be construed as something rigid that is imposed. On the contrary, it is used here in tandem with the term “genetic” in the classic sense of genesis or openness to development. Likewise, the term “method” is not to be construed as something rigid that is imposed. On the contrary, “[t]here is a method, then, where there are distinct operations, where each operation is related to the others, where the set of relations forms a pattern, where the pattern is described as the right way of doing the job, where operations in accord with the pattern may be repeated indefinitely, and where the fruits of such repetition are, not repetitious, but cumulative and progressive.” op. cit. Method in Theology, 4. that will eventually be implemented in every field of human inquiry. Its components are verified by centuries of intellectual fermentation that one might describe as having emanated from “the pressures of history.” Its foundation, empirical method, will continuously operate and enrich each of the interdependent tasks within the structure. 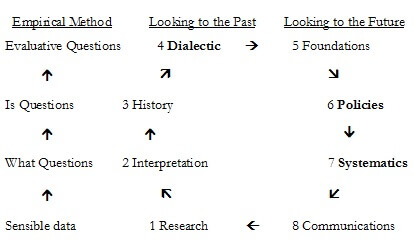 The eight tasks appear in bold. Description of each task has been refined and numbered below. Corresponding description from the sample syllabus is italicized and in bulleted points.

Looking to the Past

•  “how modern anthropologies…were created, and out of what historical, social, political and cultural conditions, tensions, and ambiguities they were fashioned.”

•  Debates: “the contributions of these theorists and the ensuing debates…examine the current debates that have critically informed questions of ethnographic methods, writing, and representation.

Looking to the Future

•  “the foundation of anthropological theory”

• Principles: “range of concepts central to contemporary anthropology” How can thinking anthropologically reconnect social and cultural theory with acts of change

•  Further Possibilities: “the kinds of anthropologies it may be possible to imagine, that can deal with the global conditions for public life in the world today.”

•  Communication of ‘high points’: “understand the ‘high points’ of different theoretical schools and see how theory in anthropology is produced and circulated.”

Note that the collaborative effort in performance of the tasks “is essentially not a distinction of specialists but a distinction of specialties. It arises, not to divide the same sort of task among many hands, but to distinguish different tasks and to prevent them from being confused.”4Op. cit. Method, 136. For additional examples of confusion in, and blurring of, the tasks as they are currently performed in the field of language studies see: Chapter 9, “Towards Methodological Restructuring in Language Studies,” op. cit. Shaping the Future of Language Studies, pp. 116-137. Likewise, in the field of physics, see Terrance J. Quinn, The (Pre)Dawning of Functional Specialization in Physics, World Scientific Publishing Co. Pte. Ltd. 2017.

Evidence of this confusion may be found in any academic essay or journal article. The data reveals the presence of the eight tasks. However, there is confusion in, and blurring of the tasks not only between paragraphs, and between sentences within a paragraph, but also within a sentence. The result is that the performance of each task is reduced to a mere shadow of its proper function,5“It is to be noted that such functional specialties are intrinsically related to one another. They are successive parts of one and the same process. The earlier parts are incomplete without the later. The later presuppose the earlier and complement them. In brief, functional specialties are functionally independent. Such interdependence is of the greatest methodological interest. First, without any prejudice to unity, it divides and clarifies the process from data to results. Secondly, it provides an orderly link between field specialization, based on the division of data and subject specialization, based on a classification of results. Thirdly, the unity of functional specialties will be fund, I think, to overcome or, at least, counter-balance the endless divisions of field specialization.” (Method in Theology, 126.) or a “shadow zone.” We present, for example, an excerpt from the journal article, “Englands of the Mind,” by David Gervais below.6With a few necessary modifications, all the material from the beginning of the next paragraph to the end of the article is drawn from Shaping the Future of Language Studies, 129-131. or a cross-section of examples in language studies, see Chapter 9, “Towards Methodological Restructuring in Language Studies,” Shaping the Future of Language Studies, 116-130.

[1] But even on these terms, ‘Englishness’ is hardly enough on its own. [2] Montesquieu once said ‘Je suis homme d’être français’. [3] English art has to be more than just English. [4] To think of Purcell as an ‘English composer,’ as if that were to distinguish him from Bach or Monteverdi, is to obscure the music. [5] The English like to think of Shakespeare as ‘English’ but, to the rest of the world, his plays are simply drama itself. [6] Great art has a nationality of its own. [7] If we link its meaning to its origins we risk confusing it with politics. [8] Cultural studies and culture is not the same thing. [9] Is Goethe any less German for discovering part of himself through Shakespeare? [10] When Charles V picked up Titian’s brush or when the evangelical Ruskin was bowled over by the counter-Reformation allegories of the Scuola di San Rocco, they were acknowledging that ideology is more finite than art. [11] Yet a great deal of English art, even that of a major figure like Britten, can seem over-conscious of its own ‘Englishness.’ [12] Geoffrey Hill matters because he is able to express the experience of ‘Englishness’ through the experience of the rest of Europe. [13] (The English poets of the great war seem to be writing about an English war.) [14] Even Kipling asked, ‘What do they know of England who only England know?’ [15] Being set in a silver sea has its drawbacks. Sometimes writers need to leave home. [16] The problem for them today is that Europe, let alone the world, offers them only a politico-economic destination not a cultural one.

Imagine how the eight tasks would work in your field of study.

The first four tasks refresh George Santayana’s popular saying: “Those who cannot remember the past are condemned to repeat it.”7Variations of this famous quote by the Spanish philosopher, George Santayana [1863-1952] have become embedded in popular culture. https://en.wikiquote.org/wiki/George_Santayana 8/8/18. And, might we add remembering the past critically? Would it not make sense that Santayana and others (perhaps pioneers in your field of study), prompted by recurring social, political and economic disasters, were desperate to uncover relevant clues8In this regard, the relevant clue sought could be termed an “anomaly,” the discovery of which might have had either a positive or negative effect on a concrete situation. from which to chart the best way forward?

How has “humanity’s stumbling start” influenced the limited way in which we think about the future? Take, for example, the ethos of technological advance for its own sake and its ambivalent impact on the quality of human life.9Does it not make sense that applied science is barely into its infancy? Is it also not puzzling, and tellingly ironic, that a culture can coin the expression, “A.I.” (“artificial intelligence”) at a time in history when there is widespread confusion about what human intelligence is? The problem has deepened enormously. Consider, for instance, the massive destructiveness of constructivism in modern education, globally, and the consequences of modeling human intelligence on the basis of spatially imagined networks of computer circuitry. Does the globe’s current economic and environmental path not give us pause with respect to where it is leading us? Are we not “deeply interested,” perhaps desperate, for practical solutions to our current situation? How much of your post-secondary education has been devoted to thinking seriously, and critically, about the future and how your field of study might contribute, positively and sustainably, to its shaping?

3. Imagine the creative flow of intellectual labour produced by a cyclic collaboration of frontline scholars and scientists proceeding with a logically-ordered10We don’t mean “logic” in the popular sense of static or rigid. The coherence of which we speak is dynamic and regards how structure accommodates openness to development. Please recall that heuristic means ‘helping to discover’. Metaphysics is a logic of discovery that comes out of, and is improved continually, by our efforts to move forward in relevant discovery. Metaphysics applies a logic to our investigation of any area that helps to keep the search open. It picks up on the spontaneity of our thinking and spells out heuristically what that spontaneity should be attending to. The collaborative implementation of genetic method will restore philosophy to its proper status and function in the academy and in doing so, refresh the meaning of metaphysics. For further discussion regarding the distinction “between a static and dynamic viewpoint,” see Chapter 3 of Bernard Lonergan, Philosophy of God, and Theology, Philadelphia: The Westminster Press, 1973, 45-50. “In brief, like the mortician, the logician achieves a steady state only temporarily. The mortician prevents not the ultimate but only the immediate decomposition of the corpse. In similar fashion the logician brings about, not the clarity, the coherence and the rigor that will last forever, but only the clarity, the coherence, and the rigor that will bring to light the inadequacy of current views and thereby give rise to the discovery of a more adequate position.” (47) rolling forward in your field of study?

4. Imagine how that creative rolling forward of intellectual labour would, at each stage of the process, generate a certain sifting, of best-to-date products, that would bring progressive results to your field of study.