As the labor proceeds … the full objectification of the human spirit is the history of the human race. It is in the sum of the products of common sense and common nonsense, of the sciences and the philosophies, of moralities and religions, of social orders and cultural achievements, that there is mediated, set before us the mirror in which we can behold, the originating principle of human aspiration and human attainment and failure. Still if that vast panorama is to be explored methodically, there is the prior need of method.1Page 14 of Lonergan archival file labeled A697, Typescript pp. 8-23.

Bernard Lonergan’s extraordinary perspective on history’s unfolding narrative anticipates the need for verifiable and up-to-date heuristics. These heuristics will also give us a preliminary glimpse into how the ineffective and inefficient routines of “academic disciplines” will be supplanted.2Our optimism, in the long-term, is that the invitation and challenge posed in Journeyism 18 will bring about a positive anthropocene to “‘hold to the light of critical reflection’ what it means to correctly understand our experience, on the way to discover an intelligent and reasonable realism.” We are also anticipating the rebirth of philosophy in the academy with the coming of age (and sage) in the meaning and value of the “Ph” in “PhD”. Every future scholar and scientist will possess relevant up-to-date, verifiable heuristics with which to function competently in their field. Collaborative communities of frontline scientists and scholars, functioning in eight distinct omnidisciplinary “situation rooms,”3In the simplest sense, the metaphor, “situation room,” coined by Philip McShane, describes each of the eight functional tasks. Instead of many people working in ever-smaller specialized areas within some field, the genetic structure for method will have every scholar and scientist in every major field doing one or more of these tasks competently, with each member contributing to the ongoing narrative of a particular field of inquiry. will progress “methodically” towards an explanatory understanding4An elementary example of explanatory understanding may be found in Journeyism 25. of the manifold complexities that comprise “the history of the human race.”5For those who are curiously “bent on” investigating the material further, we have provided leading references to more advanced treatment of the topics in Bernard Lonergan and Philip McShane.

We invite you to spend some leisure6We would also like to draw your attention to a fresh, optimistic meaning of “leisure.” An efficient and effective academy will serve to “liberate many entirely and all increasingly to the field of cultural activities. It [will] not boast of science on the ground that science fills its belly. It [will] not glue its nose to the single track of this or that department. It [will] lift its eyes more and ever more to the more general and more difficult fields of speculation, for it is from them that it [will] derive the delicate compound of unity and freedom in which alone progress can be born, struggle, and win through.” op. cit. For A New Political Economy (CWL 21) 1998, 20. time on the diagrams below. To stir your imagination, we start with “a symbolic indication of the total range of possible experience.”7op. cit. Insight (CWL 3), 1992, 489. Whether you are a beginner or beyond, “what matters is, not the elusive details, but the image of necessary complexification.”8op. cit. A Brief History of Tongue, 123.

It would be helpful, first, to draw your attention to the need for suitable symbolisms:

In this life we are able to understand something only by recourse to phantasm, but in larger and more complex questions it is impossible to have a suitable phantasm unless the imagination is aided by some sort of diagram. Thus, if we want to have a comprehensive grasp of everything in a unified whole, we shall have to construct a diagram in which are symbolically represented all the various elements of the questions along with all the connections between them.9op. cit. Lonergan 2002, 151.

Diagram 110The symbolism for Diagram 1 is taken directly from McShane in op. cit. A Brief History of Tongue, 121-123. McShane’s original venture may be found in op. cit. Wealth of Self and Wealth of Nations, Hicksville, NY: Exposition Press, 1975, 106-7 (now a website book).

Below we present a very dense diagram.

First, though, let’s focus on the lettered symbols within the parentheses.

Bluntly, the starting point of metaphysics is people as they are.11op. cit. Insight (CWL 3), 422.

A beginner should think of this series of letters mainly as a help to remember that the human is a layered reality of physical, chemical, botanical, zoological, rational and religious12Note: the final layer, “religious,” encompasses “religion” and “spirituality,” commonly used interchangeably in various contemporary individual and collective contexts, and assigned a range of meanings commensurate with each. The meaning of “religious” and “openness to presences unseen” originates from “supernatural” in Medieval Latin supernaturalis “above or beyond nature, divine,” from Latin super “above” … + natura “nature” (https://www.etymonline.com/word/supernatural. Reference taken on May 15, 2020). “For the supernatural solution not only meets a human need but also goes beyond it to transform it into the point of insertion into human life of truths beyond human comprehension, of values beyond human estimation … For such a solution would be a higher integration; of its very nature it would respect and indeed foster the proper unfolding of all human capacities.” (op. cit. Insight (CWL 3), 747. actualities. As one advances, the meaning of the symbols increase in a manner that parallels the student advancing in, say chemistry: after many years of scientific study the periodic table means much more to a graduate chemist.13Supplementary description of Diagram 1 is taken directly from Philip McShane’s website presentation, “Prehumous 2, Metagrams and Metaphysics,” http://www.philipmcshane.org/prehumous/.

There is also the value of reading that text with these layers non-empty. So, one can ascend to consider the human, and one has the nudge of appreciation that virtues are not simple realities but ‘flexible circles of ranges of recurrence-schemes.’14Please see Philip McShane, “The Importance of Rescuing Insight,” in The Importance of Insight, Essays in Honour of Michael Vertin, eds. John J. Liptay Jr. and David S. Liptay (Toronto: University of Toronto Press, 2007), 202: “Organic, psychic, and intellectual development are not three independent processes. They are interlocked, with the intellectual providing a higher integration of the organic. Each level involves its own law, its flexible circle of schemes of recurrence, its interlocked set of conjugate forms. Each set of forms stands in an emergent correspondence with otherwise coincidental manifolds on lower levels. Hence a single human action can involve a series of components: physical, chemical, organic, neural, psychic, and intellectual; and the several components occur in accord with the law and realized schemes of their appropriate levels.” Also, op. cit. Insight (CWL 3) 1992, 489, second paragraph: “Study of an organism begins…”

Now, we reassemble the symbols.15We recommend Terrance Quinn’s introductory treatment of the symbols in his Invitation to Generalized Empirical Method, World Scientific Publishing, 2017.

H       = the intending of history as emergent fact, which includes, of course, symbolically and heuristically, all the histories or stories that are written or to be written.

R       = structures of relations to be discovered

f    = things functioning in history in various layers, each layer with its own network of relations, represented by the subscripts

What are the advantages of having this kind of symbolism? Among other things there will be a

controlling power…either in initial or advanced work. Take the words ‘phantasm’ and ‘consciousness.’ The control alerts one, beginner or expert, to the reality referred to as zoological: a layered reality of physics and chemistry and botany. Without being thus alerted one could be stuck with a dangerous initial descriptive meaning, and with that meaning there is little chance of a broadened base of dialogue with modern searching.16ibid. 161.

The really important and difficult part of the symbolism is the semi-colon that separates the layers. It points to the difficulty of coming to grips with aggreformisms,17Please see Chapter 8, “Things,” Insight (CWL 3) 1992, 270-295 and Chapter 15.3, “Explanatory Genera and Species,” Insight (CWL 3) 1992, 463-467. Also, to get a further sense of its complexity, go back to footnote 11 for McShane’s brief description of organic, psychic, and intellectual development. a massively difficult personal struggle quite beyond the beginner. In the future, “[f]ront-line scholars will have an increasingly adequate heuristics of aggreformic entities.”18Terrance Quinn, The (Pre-)Dawning of Functional Specialization in Physics, World Scientific Publishing, 2017, 158. In a footnote, Quinn adds, “This is a major scientific challenge of our time. See Lonergan [1992], ch. 8 and the transposition to sec. 15.3. The issue is discussed in many works by McShane – see e.g., McShane [1998], 102-123. Terrance Quinn touches on these topics in Invitation to Generalized Empirical Method [2017], 5.5 “Intending History, 161-176.”

In Diagram 2 we have recast the names of “things functioning in history in various layers” that were symbolized in Diagram 1. This provides us with an image of how empirical method will function within the genetic arrangement of the eight tasks, while at the same time, emphasizing the omnidisciplinary orientation operative in each task. 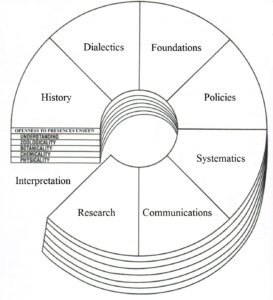 By pausing with us over our two diagrams, can you sense how the creation of a best-to-date heuristics opens up the possibility of the future academy’s control of human meaning in all its dimensions?