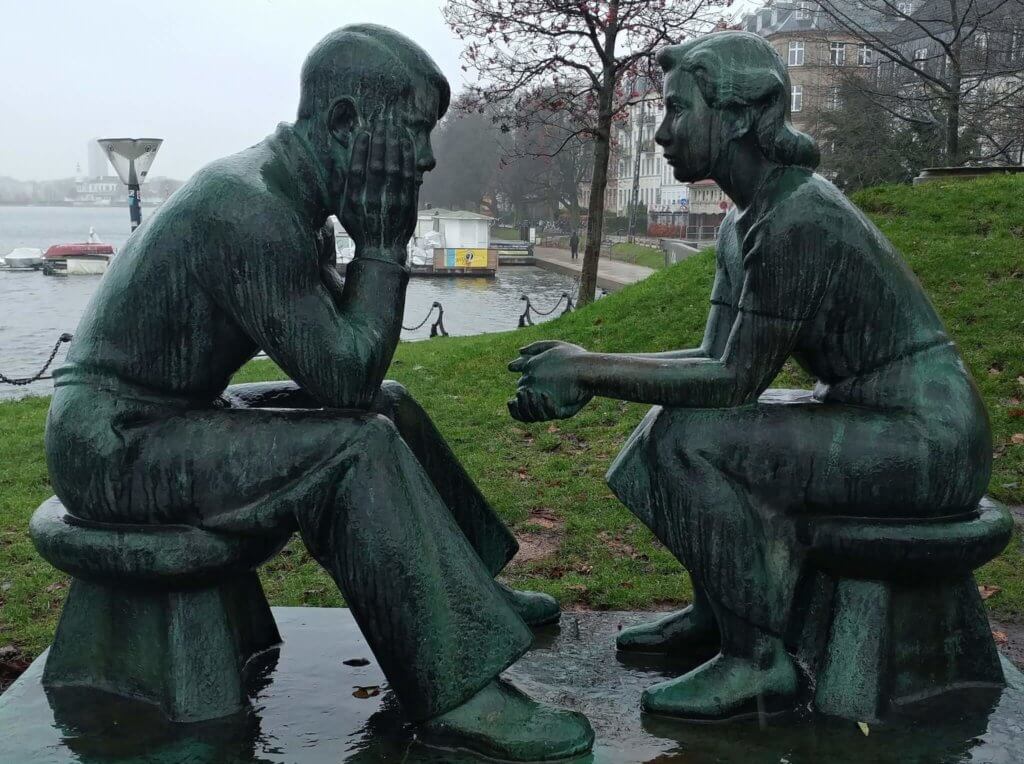 How Does Intellectual Labour Proceed? (Part 2)

In Journeyism 4 we ponder the question, what is the significance of these expressions with respect to how intellectual labour proceeds?

We reveal their significance by recasting human products (static) in Table 1 into human activities (dynamic) in Table 2 (below).

Recast the data for human products (static) in your “Table 1” to human activities (dynamic) and label it “Table 2”.

Table 2 points to the possibility of distinct, but very different, approaches to reading these expressions, namely, “static” and “dynamic”. “Static” represents a conventional approach to reading them that has been almost exclusively “educated into us”: reading to be informed, to absorb or memorize information. “Dynamic”1dynamic 1. adjective (of a process or system) characterized by constant change, activity, or progress. 2. (noun) a force that stimulates change or progress within a system or process. (Retrieved 01-22-20, https://www.google.com/search?q=dynamic&rlz=1C1RFPM_enCA830CA830&oq=dynamic&aqs=chrome..69i57j0l7.1951j0j8&sourceid=chrome&ie=UTF-8) represents an empirical approach to reading them that, regrettably, has been virtually “educated out of us”: reading controlled by our desire to understand data.2This should not be confused with the pervasive myth about “understanding concepts”. See Journeyism 9.

Are you curious about what the distinction between “static” and “dynamic” implies? If so, your wonder is beginning to take control of your reading. How is this revealed? By experiencing the activity of “making sense” of data, where your “making sense” is not of becoming “informed by this or that content”, but of creatively generating the additional act of understanding in “a flash”.

For example, recall not getting the punch line to a joke. You wondered why others found it funny and suddenly burst into laughter. You wanted to make sense of the punch line. You heard the same punch line as the others but that “taking in” of the language, of the words themselves, and how they were arranged on their own, was not enough to “get it” at that moment. In the meantime, you persisted in your desire to understand. Then, in “a flash,” the tension was released and you burst out laughing.

This example helps to illustrate the two contrasting ways of reading. The significance of the difference between the two is not a joke.3See Journeyism 9. How so?4A handy way to think of the question, “HOW?”, would be as an acronym for Home Of Wonder. On the one hand, before wonder occurred, the words to the punch line themselves could be taken as information that is easily memorized. And even though you knew what each of the words meant and could repeat them, you’d still be none the wiser. So, at that point, they were merely a pattern of sounds or linguistic signs (sensory data) you had taken in. On the other hand, after wonder occurred, you struggled as long as it took to make sense of the data, and were rewarded with a creative “flash” of understanding, and of course, a good laugh.5We are also drawing your attention to the dynamic relationship between human wonder and human language. There is the challenge to break through to its discovery, in contrast to conventional reading, the exercise of which, like blindly repeating the words to a punchline, allows us to repeat “an insightful world-view, but if it includes [me], does it include [me] that I am, that I might be [to] the exclusion of my curiosity…?” Philip McShane, Introducing the Thought of Bernard Lonergan, London: Darton, Longman and Todd, 1973, p. 12.

Our next task is to reveal how our dynamic approach to reading these expressions is relevant to the structure of human knowing: to what actually occurs when you, or we, or anyone is thinking.

The difference between natural and human science is that the data for the former are basically sensible, while the data for the latter add human meanings.6Bernard Lonergan. Macroeconomic Dynamics: An Essay in Circulation Analysis (CWL 15), University of Toronto Press, 1999, p. 10.

We are gradually working toward how to read this quotation with an elementary, but secure, understanding. Hence, we face this preliminary struggle to shift to an empirical approach in order to make sense of how our intellectual activities are structured and what they mean. Remember our pledge to observe a leisurely pace that respects the struggle to understand? We encourage you to persevere, to move at your own pace as you work through these exercises and examples.7In addition, we discover a startlingly symmetrical relationship between how our curiosity works and how language works and “[i]t would seem that this preliminary task would have to be conducted in literary language….” (CWL 3, 452). See Bernard Lonergan, “The Method of Metaphysics”, (CWL 3), University of Toronto Press, 1992, pp. 448-455. The literary language to which Lonergan refers is a future form of philosophical language, uncompromising in its reach, called “linguistic feedback”. Our Journeyism series is a modest, initial undertaking in that regard – a sort of halfway house. Why can this shift be so difficult? We draw that out by briefly describing aspects of an historically-confused academic landscape.8We slide past the important topic of how current academic practice evolved. For a brief historical context, see Chapter 7, “A Dialectic Analysis of the Investigation into Language Universals,” Shaping the Future of Language Studies, 82-100.

If your exposure to higher education is predominately literary, then it will be difficult enough not only to see the need for, but also to undertake the required shift to, an empirical approach. After all, thinking empirically is an activity foreign to the commonsense tradition of spontaneity, rhetoric, eloquence, erudition, feats of memory, humour, satire and wit9That having been said, we are certainly not diminishing its symbolic value insofar as such discourse can reveal, brilliantly, our humanity in all its foibles and aspirations and open up further possibilities for a more enriched human living. “Satire laughs at, humor laughs with. … For if satire becomes red with indignation, humor blushes with humility. … But the significance of satire and humor is, I suggest, out of proportion to their efficacy. (op. cit. (CWL 3, 649.) that have inhabited the established domain of Philosophy, the Arts and Humanities for centuries.

If your exposure to higher education is predominately “scientific,” there is a convention of limiting “scientific thinking” to the established domain of Natural Sciences.10The philosophical tradition proposed “an analogy of science. Science properly so called is the conspicuously successful science….Other subjects are scientific in the measure they conform to its procedures and, in the measure they do not, they are something less than scientific….So today the English word, science, means natural science. One descends a rung or more in the ladder when one speaks of behavioral human sciences [that] often have to be content if their subject is included in a list not of sciences but of academic disciplines.” Bernard Lonergan, Method in Theology, 1972, 3. We will resume this particular topic in Journeyism 22. Furthermore, this convention excludes most reflections in Philosophy, the Arts and Humanities from the activity of “scientific inquiry”.11The dye was cast by the Aristotelian tradition. Evidence of its origin appears, for example, in n82a Magna Moralia 1: “Neither was Socrates right in making the excellences sciences. For he used to think that nothing ought to be in vain, but from the excellences being sciences he met with the result that excellences were in vain. Why so?  Because in the case of the sciences, as soon as one knows what the science is, it results that one is scientific (for any one who knows medicine is forthwith a physician, and so with other sciences). But this result does not follow in the case of the excellences. For any one who knows what justice is not forthwith just, and similarly in the case of the rest. It follows then that the excellences are actually in vain and that they are not sciences.” Bernard Lonergan would write of Artistotle’s position in a 1935 letter, “I advance that Aristotle was a bourgeois, that he introduced the distinction between speculative and practical to put the ‘good’ as Socrates and Plato conceived it out of court.” See Journeyism 19, footnote 3.

It is not our present task to resolve this complex and divisive issue.12Our critical resolution to this issue will be addressed beginning at Journeyism 22, “Redefining Academic Discipline (Part 1),” faced directly in Journeyism 24 and 25, with a few leading remarks added in Journeyism 26, “Follow your spirit…Here. Now.” A brief presentation of its resolution will emerge at a later stage.13See Journeyism 18 to 26. The task now is to help you discover that when you approach any topic with relevant data and questions, you are on secure ground, immune to being fanciful or even “unscientific”.

Therefore, each exercise is preliminary to an emerging empirical culture of the future that will continuously refresh the meaning of modern science, natural and human.14See Journeyism 26. “Empirical method generates verifiable heuristic structures.” and attached footnote 6.

The point I wish to make is that modern science is not simply an addition to what was known before. It is the perfecting of the very notion of science itself, of knowing things by their causes, by analysis and synthesis … science in general is a gradual actuation of intelligence with respect to empirical data, and that gradual actuation yields an ever more accurate notion of what science is.1515 op. cit. Topics in Education (CWL 10) 6. “Science and the New Learning,” 2.3 “Field Theory,” 155 and 2.6 “Conclusion,” 157.