In sections 1 and 2, we drew attention to the fact that in early economies there were two kinds of work, basic and surplus. The same is true in modern economies. The situation, of course, is more complicated and includes monies and sophisticated financial structures.

Quinn’s great uncle was a blacksmith in Owen Sound, Ontario, Canada. A large part of what the uncle did was make tools for local trades. He also made horseshoes, as well as metal parts for carriages and wagons. In those days, most horses in town were for pulling carts for local trades. Some were workhorses on farms. A few, though, were for leisure and sport. Now and again, the blacksmith would be asked to make an iron gate and other things for family properties. Evidently, while the blacksmith worked in both parts of the economy, most of his work was for providing surplus goods rather than basic.

There were, however, numerous subtleties that we will leave for you to think about as you go along in this series, and also in follow-up reading. For instance, some of the blacksmith’s tools were made partly of hardwood and partly of iron. Gloves and aprons were made of leather. The process of obtaining materials (wood, ore, coal, water, leathers, etc.), transportation, partial manufacture, further transportation, completing manufacturing, distribution and sales was already interprovincial, and in some cases international. But, if you work through a few examples, you will see that everything produced was either basic or surplus. Banks also played an important role in the Ontario economy. We discuss banks in Section 3.2, in connection with two contemporary businesses.

3.2      Building, Buying and Liens in the New Standard Model

There are several builders that currently work out of Owen Sound. One of these is Clancy Builders Ltd.1http://www.clancybuilders.ca/about-us/ They specialize in building family homes. Families need homes and Clancy Builders makes homes. Of course, a sale is needed to close a deal and until that happens Clancy Builders is on the hook for the cost of having built the home. In that sense, until sold, the business of building and selling a home is not yet “finished business.”

We track some of the transactions involved in building and selling one of these homes.

Clancy Builders pays their employees. They also pay for building supplies, fuel for their trucks and subcontracting. On occasion there may be rental fees for specialized or temporary replacement machines. All of this contributes to the long process that begins with wood, ores and other natural resources and ultimately results in a completed home. In other words, Clancy Builders directs part of its financial outlay into the basic part of the productive process2See Section 2.. On a regular basis, however, tools need to be repaired or replaced. And so, part of their financial outlay also is directed to the surplus part of the economy.

What about home buyers? Someone who buys a home from Clancy Builders agrees to a sale price. It is rare that a home is purchased in a single payment. Usually, banks are involved and mortgages are set up. The bank (or, in some cases, “mortgage company”) pays the selling price to Clancy Builders. The home buyer becomes the “owner of record” but it is the bank that is the “lien holder.” The terms of such an arrangement require the homeowner to pay the bank, usually on a monthly basis over several years, each payment a combination of interest and principle, until the original debt is paid.3Amortization formulas for determining monthly payments are well-known and are often taught in high-school financial mathematics classes. Monthly payments depend on the present-value of the loan, pay-off period and nominal interest rate which usually is “compounded monthly.” Failure to make payments can result in the bank repossessing the home and trying to find another buyer, that is, some new owner of record.

In what we just described, there are three main stakeholders. There are the home buyer and home builder. Their roles seem clear enough. What, however, is the role of the bank? A bank is not in the business of building homes. They do, though, provide services by which to facilitate a change of ownership from Clancy Builders to the purchaser of the home.

There are other builders in Owen Sound, one of which is Graham Design and Construction.4http://www.grahamconstruction.ca If you look through their (online) gallery of projects, you will find that most of their contracts are for building premises for businesses. So, Graham Design and Construction mainly operates in the surplus part of the productive process. However, much as for Clancy Builders, their financial outlay also splits. Their outlay includes salaries to employees and payments to businesses supporting their operations. But, just as for Clancy Builders, monies also are needed for maintenance and more, in the surplus part of the productive process.

Remember the diagram at the end of Section 2 for two types of work in a primitive economy. As the examples here help bring out, the same division is found in modern economies. However, currencies, banking and other financial services also come into the picture. How, then, might we diagram the modern economy? As mentioned above, the basic and surplus parts of the productive process can include long supply chains, the results of which are either basic or surplus goods and services. For readers who have taken an elementary course in economics, you may recall the words “supply” and “demand.” However, as examples reveal, there are two types of supply and demand. We also need to include banking and mortgage services. These are involved with almost all stakeholders in all parts of both levels of the productive process. So, why not put them in the middle of the diagram?

We jump now to the general diagram.5We do this in the same spirit that a periodic table is introduced near the beginning of a chemistry course. It will be up to you as a reading exercise to think out how the three examples just described can be accounted for with help from the diagram. We will say more about that below. 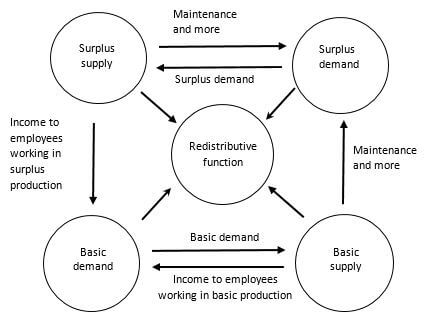 Do you see that banks and mortgage companies fit nicely in the middle of the diagram? One of their roles is to redistribute funds and mediate change in ownership. Clancy Builders operates mainly in the basic part of the process, while Graham Design and Construction operate mainly in the surplus part. Arrows from basic demand (bottom left of the diagram) to the redistributive function (center of the diagram) include mortgage payments to a bank made by owners of record. Arrows from the redistributive function to Clancy Builders includes payment of the sale price of a completed home from a bank to Clancy Builders. Similar payments are made between Graham Design and Construction, its business customers and banks. Of course, percentages of these various payments also go to the bank, for they too need to pay their employees and cover their operating costs.

Why are the arrows in the diagram above only pointing inward? It is a matter of keeping the diagram simple. Payments can go both ways. Although, in circumstances where accounting is complex, one might do well to have a convention of signs where, say, monies paid into the redistributive function are negative while those from the redistributive function are positive (or vice versa, so long as there is consistency).