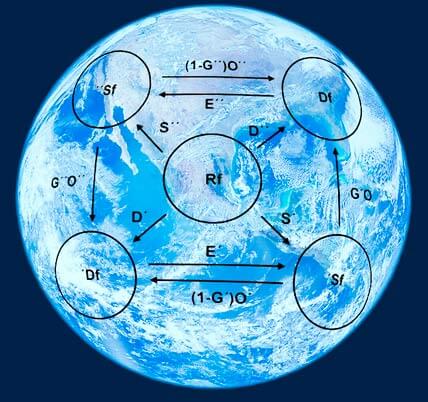 We all sense instinctively that something is wrong. But we struggle to put our finger on it.1David Pilling, The Growth Delusion. Wealth, Poverty and the Well-being of Nations (New York: Tim Duggan Books, 2018), 4.

Having worked through A Very Brief Introduction, you are already familiar with the fact that in any economy there are two main flows and five functions (surplus and basic supply and demand, and a redistributive function). You may now also be aware of various errors in current economics. Some of these are: the one-flow model or circular-flow model; commoditization of monies; institutionalization of greed under the guise of a formalized “profit motive”; and appealing to stock markets as a gauge of economic well-being. The one-flow model is no more explanatory of economic processes than, say, the observation that water flows downhill explains water flow (let alone global water cycles). The commoditization of money and the “profit motive” have no normative linkage to economic processes. And, the stock markets (not part of the productive process) operate like a global casino, parasitic to world economies2See section 4.2 of A Very Brief Introduction..

Economists build their “toy economies” to help explain economic variables, such as GDP, inﬂation, and unemployment. Economic models illustrate, often in mathematical terms, the relationships among the variables. Models are useful because they help us dispense with irrelevant details and focus on underlying connections. (In addition, for many economists, building models is fun.)

How does one know in advance what “irrelevant details” are, or which aspects of an economy are “endogenous” and which “exogenous”?

The approach is further revealed in an editorial piece:

Let’s start with the problem.

There is no simple way to gauge an economy’s health. But if you had to choose just one statistic, it would be gross domestic product. Real G.D.P. measures the total income produced within an economy, adjusted for the overall level of prices.

So there they are. One sickness, five diagnoses. Unfortunately, I have no idea which one is right. The truth may well involve a bit of each.4N. Gregory Mankiw, “One Economic Sickness, Five Diagnoses,” The New York Times, The UpShot, June 17, 2016, https://www.nytimes.com/2016/06/19/upshot/one-economic-sickness-five-diagnoses.html?ref=business.

As Mankiw observes in his textbook, there are

three statistics that economists and policymakers use most often. Gross domestic product, or GDP, tells us the nation’s total income and the total expenditure on its output of goods and services. The consumer price index, or CPI, measures the level of prices. The unemployment rate tells us the fraction of workers who are unemployed.5Mankiw, 17-18.

Numerical data for GDP, CPI and employment rates can be and are obtained. However, what do they mean? As brought out in A Very Brief Introduction, GDP represents a total volume in a time period. By definition, the quantity is remote from any particular “household or firm.” Moreover, it ignores the fact that there are two flows.

This Preface is not the place to discuss details of contemporary models (e.g., stochastic models, systems of partial differential equations, and such). It is enough for now to suggest that potential relevance to concrete situations depends on whether or not events in a model are explanatory of actual outcomes. And, GDP is neither explanatory nor indicative of any actual outcome. We ask an elementary, but what for contemporary economics remains, an unwelcome question: What is happening in concrete situations?

As in A Very Brief Introduction, by tracking actual exchanges we find two-flows of production and five functions. These are present in businesses of all sizes, from the smallest roadside business to global corporations and world stock markets.

Adverting to the two-flows and five functions will need to replace current practice. However, more will be needed. For, the structure is operative in any economy, whether or not it is working well, sustainable or humane.

This means that, while adverting to the two-flow structure will be key, that will only be part of the solution to present-day difficulties. How are we to implement economics’ new standard model? What will be our standards of living? Neither the cultural part of the problem nor the question of “standard of living” is resolved by merely adverting to the two-flow structure.

But what do we mean by “standard of living”? To avoid confusion, we considered using a different term. For, in the literature, ‘standard of living’ has many meanings that depend on the model being used. Usually, it is taken to refer to some combination of: “degree of wealth,” “level of wealth,” “material comfort,” “amount of goods and services,” “income,” “gross domestic product (GDP),” “national economic growth,” “economic and political stability,” “political and religious freedom,” “environmental quality,” “climate” and “safety.” No doubt, some of these can be descriptive of how a community is doing.  Although, by now, you will know that GDP, “national economic growth,” and other similar terms do not refer to concrete situations and that numerical “metrics” for “standard of living” are problematic. However, in the end, we kept the expression ‘standard of living.’ In two-flow economics, standard of living is concrete. That is, it refers to what is happening in a community, for better or for worse:

In any given area over any period of time there exists some standard of living, some quantitative rate at which people are obtaining food, clothing, shelter and the implements of amusement, art, education, law, medicine, politics, religion, research and war. … [I]t is a rate, not ‘goods and services’ but a ‘flow of goods and services,’ not a ‘so much’ but a ‘so much every so often.’7CWL21, 205.

In particular, standard of living is not prescribed by a model.

This brings us to being able to say something further about the context of Part II as well as provide the layout of sections.

We start now with the standard diagram of current economic texts and move fairly smoothly to a diagram that points to the new science of economics that is to save us from global disaster. I wish you to come with me slowly and quietly from the standard diagram, through two transition diagrams, to the central scientific diagram of future economics.9Economics for Everyone, iii. For the entire discussion, see iii (middle of page) to v (top of page). A free open access abridged version is available: Philip McShane, “The Key Diagrams,” http://www.philipmcshane.org/wp-content/themes/philip/online_publications/articles/Text%20and%20Diagram_all_PP%2011-14.pdf. For readers who are already teaching economics, helpful leads are also provided in Philip McShane, “Teaching High School Economics. A Common-Quest Manifesto,” Prehumous 1, http://www.philipmcshane.org/wp-content/themes/philip/online_publications/series/prehumous/prehumous-01.pdf. Accessed April 20, 2019.

Both of these lessons invite the reader to some understanding of the fact that there are two flows. They do so partly by inviting the reader to attend to actual transactions.

Part II of our series takes a similar approach. We too begin with actual businesses. Our example, however, involves contemporary financing. The need to understand something of the productive process comes up later, within contemporary contexts. Part II, then, is intended in some respects as a bridge, but in other respects, as supplementary to: Economics for Everyone, “The Key Diagrams” and the grade 12 family bakery story.11We provide numerous references to both Economics for Everyone and CWL21.

In section 1, we again draw attention to the main structures. This time, however, we do so by looking to the operations of a business in a modern city. QC Painting was a student painting business run by Quinn and Connor12Connor was not his real family name., over three summers (1979-1981) in Toronto, Canada. Explanation of even a small business venture requires the full set of surplus-basic correlations.

In section 2, we provide a few numerical examples to help the reader gain some experience with monetary functions. In a first read, you might want to glance at these and return later to work out the details.

In section 3, we develop a few main features of a modern exchange economy.

In section 5, we look briefly to contemporary growth models. Among other things, they attempt to define economic growth in models that have little or nothing to do with actual economic process.

In section 6, we point to the fact that there are certain equilibria in economies. We are not referring to “mathematical equilibria” but ones that are verifiable in economies, from primitive to modern.

In section 7, we explore mechanisms by which an economy moves from one equilibrium to another.

In section 8, we explore strategies needed to help an economy move to a new equilibrium.

Sections 1-8 are under the artificial hypothesis of an economy being “closed.” Modern economies include international trade. In the same spirit as sections 7 and 8, in section 9 we draw attention to how understanding the structure of international trade sheds light on needed economic strategies.

In section 10, we describe a collaborative structure discovered by Bernard Lonergan in 1965 called “functional specialization.”13Bernard Lonergan, “Functional Specialties in Theology,” Gregorianum, 50 (1969): 485-505. Essential aspects of the structure are already subtly present. A key problem is standards of living. We point to ways in which, through functional collaboration, we will move toward guiding economics to a new stage in history that we call the positive Anthropocene Age.14James Duffy, Philip McShane and Terrance Quinn, Openers of the Positive Anthropocene, December 2018, https://www.anthropositivecene.org/. Accessed April 27, 2019.